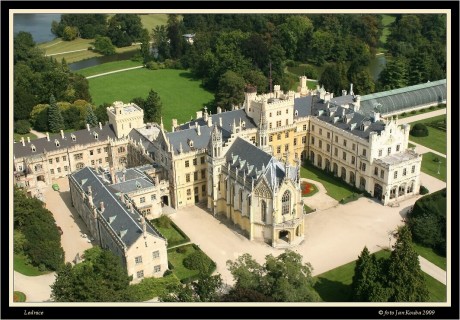 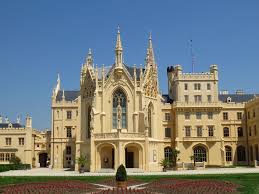 The first historical record of this locality dates from 1222. At that time there stood a Gothic fort with courtyard, which was lent by Czech King Václav I to Austrian nobleman Sigfried Sirotek in 1249.

At the end of the 13th century the Liechtensteins, originally from Styria, became holders of all of Lednice and of nearby Mikulov. They gradually acquired land on both sides of the Moravian-Austrian border. Members of the family most often found fame in military service, during the Renaissance they expanded their estates through economic activity. From the middle of the 15th century members of the family occupied the highest offices in the land. However, the family’s position in Moravia really changed under the brothers Karel, Maximilian, and Gundakar of Liechtenstein. Through marriage Karel and Maximilian acquired the great wealth of the old Moravian dynasty of the Černohorskýs of Boskovice. At that time the brothers, like their father and grandfather, were Lutheran, but they soon converted to Catholicism, thus preparing the ground for their rise in politics. Particularly Karel, who served at the court of Emperor Rudolf II, became hetman of Moravia in 1608, and was later raised to princely status by King Matyas II and awarded the Duchy of Opava.
During the revolt of the Czech nobility he stood on the side of the Habsburgs, and took part in the Battle of White Mountain. After the uprising was defeated in 1620 he systematically acquired property confiscated from some of the rebels, and the Liechtensteins became the wealthiest family in Moravia, rising in status above the Žerotíns. Their enormous land holdings brought them great profits, and eventually allowed them to carry out their grandious building projects here in Lednice.
In the 16th century it was probably Hartmann II of Liechtenstein who had the old medieval water castle torn down and replaced with a Renaissance chateau. At the end of the 17th century the chateau was torn down and a Baroque palace was built, with an extensive formal garden, and a massive riding hall designed by Johann Bernard Fischer von Erlach that still stands in almost unaltered form.
In the mid-18th century the chateau was again renovated, and in 1815 its front tracts that had been part of the Baroque chateau were removed.

The chateau as it looks today dates from 1846-1858, when Prince Alois II decided that Vienna was not suitable for entertaining in the summer, and had Lednice rebuilt into a summer palace in the spirit of English Gothic. The hall on the ground floor would serve to entertain the European aristocracy at sumptuous banquets, and was furnished with carved wood ceilings, wooden panelling, and select furniture, surpassing anything of its kind in Europe.