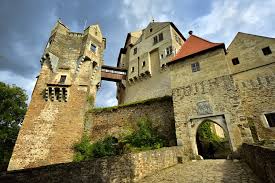 Extensive representative seat, one of the best-preserved Gothic castle

with us. It was built in the mid 13th century, the seat of the Lords of

In historical sources first historical mention of the castle dates back to the late 13th century, when in 1285 says Stephen from Pernštejna and Medlov. It was a very large building with the palace and the keep, a cutting tower called Barborka. Much of Pernštejna family grew and financial possibilities also, at the turn of the 15th and 16th centuries was carried out major reconstruction on representational political and administrative center. It is not known where construction work started, perhaps it was soon extended to the palace and to the south of money to build a new patio. In the 15th century were built other residential buildings and the outer fortification wall. At the newly built courtyard grew most extensive representative building with rooms in the castle called the Knights‘ Hall. Pernštejn covering towers Barborky obtained an expression massive and solid construction.

Before the advent of the second half millennia have also extended the walls of the active tower. Pernštejn but build stopped. Vaults spanned the entrance area on the ground floor. Was also completed, near the Black Gate, library and several living rooms. Along the perimeter of the core are the most diverse shapes corbels carrying bay windows and walkways, typical of Pernštejn, allowing a higher volume and more floor area than the lower floors. Wall paintings in the bedroom, children’s room and the room governess come about from the 60s of the 18th century. Conversion of St. castle chapel. Paul was painted in 1716 by Gregory Francis Ignatius Eckstein. In the early 18th century, the original decorations Knights‘ Hall accompanied by stucco reliefs GA Corbelliniho. Castle Pernštejn is interesting by its complex construction development and transformation of the medieval castle in Baroque fort in Moravia, are also prized architectural details and sculptural and pictorial decoration. Castle is also sometimes called „marble“ to the abundant use of local marble nedvědického during its construction.